So I bought one of the new front head camshafts through FPN, Thanx Torrie. It cost me 129.00 and seems to be identical with the original cam.

While looking it over I noticed a couple of paintmarks here and there but was taken back a bit when I saw a green paint/sealer BETWEEN the sprocket and the turning nut. I've attached a picture of the cam.

Is Ford marking or loctiting these pieces? 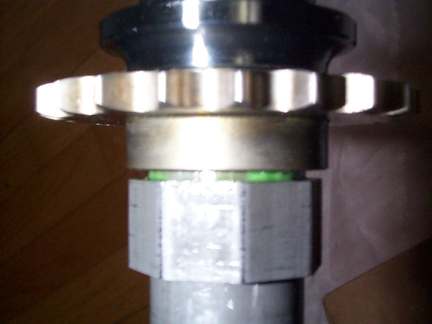 Hammy was to see if there is any dimensional or metallurgical difference between the old cam & the new & improved cam.

He is donating the effort & facilities, he only needs the 2 cams. We had a bad old cam donated. It has been difficult, on again, off again, getting a new cam to examine.

The assumption is that a through analysis will destroy the cam. I think as a group we would like to know. I suspect all fud did was spend ten cents on loctite per new cam.

Either way it would be great to know.

An inspection of the new cam that I bought and then passed on to Kirk indicated NO Loctite on it at all. I think it would be visible in some way if this was done.

I think the assumption that the new cheaper cams have any loctite on them would be incorrect.

It is possible I am wrong on this, but I seriously doubt if even Ford will rely on the loctite "solution" to supplement new off-the-shelf cams.

If Kirk still has that cam, he has my permission to donate it to you/Hammy, for this cause. He then won't have any obligation to pay me for the cost of the cam as he offered to do if he put it in a customer car. I will donate it for this analysis.

The cam that you purchased back in the Spring had no Loctite that I recall. However, someone posted a picture a few weeks ago of a new cam out of the box that had a green substance around the shaft where the sprocket sits. He wasn't sure what it was, and then a few days later, we found out about the Loctite TSB. While I can't say for sure about the TSB and the parts, never having bought them myself, I would think that it would behoove Ford to perform this TSB on all cams sold after 7/3/03, especially in light of the lawsuit. To not do it would again show a glaring inconsistency in the way this problem is being handled by Ford. Either way, it still looks like they have enough people within their organization making different decisions regarding the cams that it will eventually work out in our favor.

In any case, I think the part above about that one new cam with the green stuff on it would be enough impetus for me to donate money for another new cam, even if Hammy gets the one from Kirk, because I have a feeling that all the new cams have been loctited. In fact, I'm gonna go get on PayPal now.

I bought a new cam several weeks ago (about July 10th). There was no green (or any colored stuff) under the sprocket.

Looks more like registration marks or the paint they put on to indicate which thing to pull from what parts bin.

Loctite application should be more even.

I still doubt they put loctite on from the factory.