I love the sound of the secondaries opening, but I don't really have the time to dig in and clean it all, plus replace the cable. Thus, can someone give me a semi-detailed description of how to get at and wire open the butterflies?

Push the black plastic cable clip off the stud on the IMRC linkage (located near the water pump belt, under the throttle body... just follow the mechanical cable from the IMRC box and you'll find it.) Remove the cable sheath from the bracket. Remove the three bolts that hold the IMRC box to the front valve cover.

Relocate the IMRC box & cable to a landfill.

Use a screwdriver or other long tool to push the linkage open. Be careful because the spring on the linkage is pretty strong and it will snap closed on your fingers like a mouse trap.

One air passage is always open and the other passage switches from closed to open by means of a valve plate.  Below 3000 rpm, this valve plate is closed to improve low-speed and cold engine performance.  Above 3000 rpm, this valve plate opens to improve high-speed engine performance.  This is what you hear as your car hits 3400 rpm's; the "secondaries" open up.  If you can't hear this on your car, and your SHO seems a bit slower or sluggish, your IMRC deactivation motor may be damaged.  It will need to be replaced to bring the SHO back up to speed again.

The valve plates are opened and closed by the IMRC deactivation motor, which is controlled by the powertrain control module (PCM).

Procedure for replacement of IMRC Deactivation Motor is forthcoming.

If you take the appearance cover off you can see the IMRC cable and the front butterfly actuator. When idling in park, if you goose the throttle WOT and immediately let go of it you will see the IMRC pull on the cable just before it hits the rev limiter and when you let the throttle loose it will do a very quick blip of the IRM butterflies. Very easy and noticeable.

The operation of the IMRC butterflies can be easily checked without removing anything. First locate the throttle body accelerator cable end and arm, check that you can blip the throttle.

Next observe the return spring, arm and nut shown in the picture under the end of the appearance cover, between the two rubber hoses, this is the butterfly actuator arm. Increase engine RPM until you reach the rev. limiter at 4,000 RPM.

Just before you hit the rev. limit you will see the nut and arm rotate approx. 90 deg. anti-clockwise (towards the front of the motor). Ease off the throttle and you will see the arm and nut return to the original position.

This is the behavior of a correctly operating IMRC.

Here are the voltages at the plug disconnected from the IMRC mtr. Engine at idle closed butterflies.

On my own I didn't have enough hands to run the test and handle the meter. The lid of the box holds the motor down, so to meter the box you also have to hold the motor down as well. If I can borrow some hands I'll get the operating voltages. But it looks like the motor is 12v and the rest 0-5v.

It looks like pin 3 is the command to open the IMRC and pin 4 indicates if the IMRC is open or not. 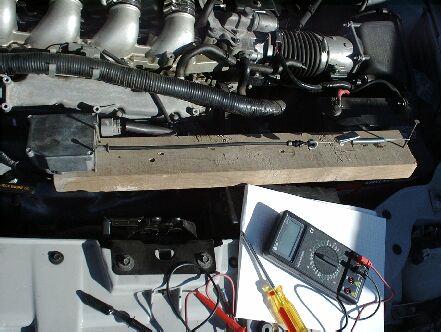 Larry, here's a better picture of the front valve cover and IMRC. If you'd like, the next weld job I do I'll get you a couple of good in-depth pictures of the lower intake and IMRC. Thanks, Matt Michael

OK so some detail that is not on the website for
replacing the IMRC cable.

-Took off the appearance cover.
-Pulled the harness out of the 3 clips and removed the
harness bracket (2 10mm bolts)
-Lifted the cable from it's retainer by compressing
the rear side and pulled it through the bracket.
-Used a large screwdriver to actuate the runner cam to
fully opened, then popped the holder on the end of the
cable off the runner mechanism with needle nose pliers
(thanks for the suggestion!)
-Removed 3 more 10mm bolts to take IMRC box off the
car.
-Removed 4 Phillips screws from IMRC cover.
-Did not screw around - used 6 lb sledge and thin
screwdriver to pop open IMRC cover by tapping it into
the adhesive - worked very easily. (Yes - take a
moment to chuckle at my use of the "Engineer's rule")
-Removed plastic hex screw (Thanks for the tip to keep
me from breaking the circuit board!) and 5 metal
screws - circuit board is loose.

How on earth do I free up the electrical connector to
get out the circuit board?

How to I get the gears into the proper position when I
put the motor back in so it is ready to actuate the
runner butterflies?

I have a bunch of detailed pics but my son is on the
computer with the software to shrink them to list
friendly size.

I'm also wondering if this cable is in fact the same
one off the Duratec. I asked my buddy last night who
used to be the PM for the 3.0 Duratec in what we call
the Gen IV SLO, but he said by then it did not have
butterfly valves.

You can't really put the gears back in "out of time" the same pulley that pulls on the cable actuates the board mounted switch that the IMRC uses to determine that the butterflies are closed. In that respect it is a very intelligent design.