How Important is it to Weld Your Cams?

I got deposed this Monday by Ford Motor Company.  They tried to argue that it was good that our cars had depressed resale value because that made them cheap to buy, and if they have a known defect why would anyone buy one?

Eric recently got nailed by a hit & run driver. Came within a fraction of eternity, was life-flighted to a trauma center that saved his life.  His ebony satin low-mile garage queen used up all of it's 5 start rating saving Eric's life and looked like a shredded tuna can after they got Eric out of it. (Mega-Kudos to Ford's Chassis Design Crew) Eric has a crushed shoulder and smashed ankle and his skin all over his body was peppered all over with crushed glass.  He could have just as easily been hosed out of a lesser car.

In the deposition I used Eric as an example, hell yes we still buy the cars, but we get 'em welded ASAP.  Eric told me he had the Rose mist pushed 50' (by his friends) in to his garage off the car dolly so he could weld it.  When I got home from the deposition this gift from the Gods was in my In-Box.  Now Ford will try to make the case that Eric, Doug, Kirk and others are taking advantage of poor SHO owners by doing inappropriate and unnecessary modifications to their cars. Yep Eric is robbing folks from his wheel chair again.  ;-)  Truth be told Eric is not welding other folks cars again, not yet. 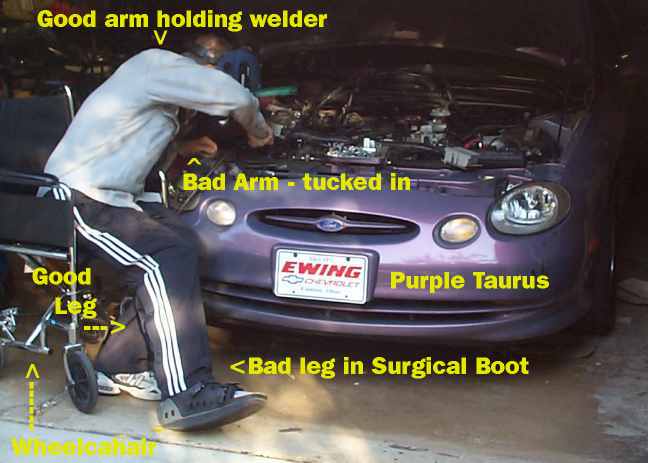 Four other important points worth noting:

Only ~1% of the 96-99 Taurus are SHOs.  The 96 Rose-Mist is among the rarest of the rare SHOs (99 Tropical Green SHO may be more rare) and most highly sought after by collectors.  This example has EVERY option including factory phone and inexplicable heated seats) This indoor garage shot does not do the Rose Mist paint job justice.  We wish Eric and his family all the best with this cherry find.

We all knew that that Eric in his present paraplegic condition is a better welder-mechanic than 99.9999% of the dealership mechanics out there.

Eric thought it more important to weld the cams than 1st remove the chebby lisc plate.

I don't know how appropriate it was to post this to FAQ, for example I have some of Eric's photos after his 2nd surgery he does not want them posted.  For that reason I no longer have many posts cheering Eric on, (But Ford still has their copy)

Eric, we think the world of you, get well soon.

"Eric told me he had the Rose mist pushed 50' (by his friends) in to his garage off the car dolly so he could weld it."

For the record. I said I was only brave enough to risk DRIVING the car 50 ft before pulling the battery off. Larry drove the car off the trailer, Kris put it in the end of the driveway and then I backed it in, in that funny way I have to back SHO's into my garage for camwelds.